Adverse Drug Reactions of Anti-Epileptic Drugs in Children with Epilepsy: A Cross-Sectional Study


Background: Adverse drug reactions (ADRs) due to antiepileptic drugs (AEDs) in children contribute to poorer patient outcomes. However, reliable data ragarding such ADRs is not available.

Objectives: Thus, the aim of the present study was to determine the incidence and patterns of ADRs of antiepileptic drugs in children aged 2-17 years presenting to a tertiary care teaching hospital.

Methods: An observational study was conducted in the Department of Pediatrics, Kalawati Saran Children’s Hospital for a period of one year. Two hundred consecutive eligible patients (aged 2-17 yrs with epilepsy on AED) with consenting parents were enrolled. ADRs were noted using Paediatric Epilepsy Side Effect Questionnaire (PESQ) at clinic visits and any other ADRs reported by parents were also recorded. Causality, severity and avoidability assessments were done.

Results: The mean age was 10.5 ± 3.6 years. A total of 139 ADRs occurred in 97 patients. One hundred and nine ADRs were reported by use of PESQ, in addition, 30 ADRs were reported by parents. Poor school result (33.8%) was the commonest ADR. Valproate (61.9%) was the main drug causing ADRs. Valproate, when used in polytherapy, was associated with more number of children experiencing ADRs (72.2%). The most common add on drug was clobazam (42.3%). Children with poorly controlled epilepsy were associated with more ADRs. Causality assessment revealed that 91.3% of the ADRs were probable. Most (94.9%) ADRs were of ‘mild’ category and 95.7% were probably preventable. Treatment was discontinued only in 6 patients of phenytoin toxicity.

Conclusion: Cognitive and neurological problems were the most common ADRs seen in children with epilepsy. Polytherapy significantly increases the likelihood of ADRs in children. 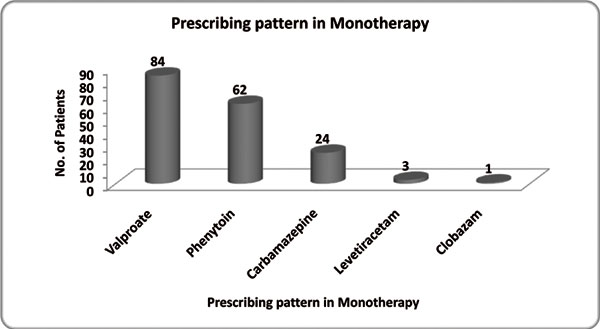