Adverse Drug Reaction (ADR) as a Cause of Hospitalization at a Government Hospital in Saudi Arabia: A Prospective Observational Study


Background: ADRs represent a substantial burden on health care resources worldwide and are considered as one of the leading causes of morbidity and mortality which significantly affects hospitalization rates. However, ADR related hospital admissions are not well explored in Saudi Arabia.

Methods: A prospective, observational study was conducted at King Saud Hospital Unaizah. Over a period of 6 months, patients above 12 years of age who visited the Emergency Department (ED) with an ADR were included in this study. The investigators collected patient data by reviewing the patient's medical records and the ED records for admission. The Naranjo algorithm was used to assess the causality of the suspected ADR, and Hartwig’s Severity Assessment Scale was used to assess the severity of the ADR.

Conclusion: Our study shows that ADRs as a cause of hospitalization in Qassim population is considerably low. However, ADRs may contribute to morbidity and mortality and result in a considerable financial burden. 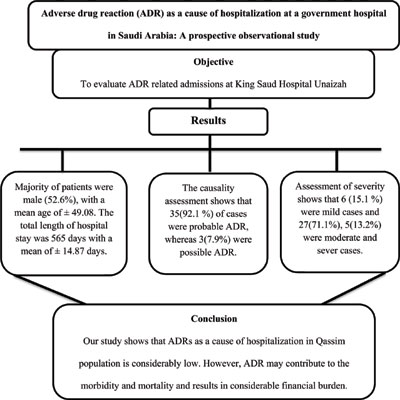